Nakagusuku Castle is on the list of 100 famous castles in Japan. It is also designated as a Japanese historical site as well as a UNESCO World Heritage site, under the title “Gusuku Sites and Related Properties of the Ryukyu Kingdom”. 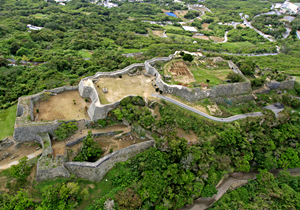 The Nakagusuku Castle ruins are located 150 to 170 meters above sea level and can be found in the villages of Nakagusuku and Kita Nakagusuku on a lush plateau of limestone that forms a straight line from northeast to southwest.
The southeast side faces a 15 meter high jagged cliff, while the northwest faces a steep slope. The only access to the castle is the main gate and the rear gate, which are located on the North and South parts of the castle on the ridge of the hill. This makes Nakagusuku Castle easy to defend and very difficult to attack.
Nakagusuku Castle is divided into 6 enclosures. Its barricades are made from Ryukyu limestone and its beautiful curving lines are in perfect harmony with the natural rocks and landscapes. 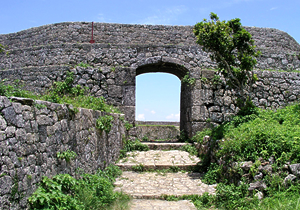 Nakagusuku Castle offers a beautiful panoramic view: from the East, you can see Nakagusuku Bay and the Pacific Ocean, while on the West, you can see the city of Ginowan & the East China Sea. The Katsuren Peninsula and Yomitan can be seen from the North and Yonabaru and the Chinen Peninsula from the South, which gives the site a picturesque touch.
The Ryukyu Kingdom was established about 570 years ago and lasted for over 450 years. It designated a feudal system that was established on the Nansei Archipelago of Japan. The Japanese government that was created during the Meiji restoration banished the king of the Ryukyu Kingdom and established the Okinawa Prefecture (instead of the Ryukyu Principality). This marked the fall of the Ryukyu Kingdom.
The term Gusuku refers to the castles that were constructed between the 12th and 16th century. These Gusukus were constructed by the so called Ajis, lords of the Gozoku (upper class). Based on the already existent agricultural settlements, a division of the territories was operated at that time, and the Ajis built Gusukus as homes as well as places to protect themselves from their enemies.

Nakagusuku Castle during the Ryukyu Kingdom

It is said that there were more than 300 Gusukus in the Ryukyu Kingdom. Nakagusuku Castle is one of the best preserved castles in Okinawa. The reason for this is it suffered very little damage during past wars. Because of this fact, Nakagusuku Castle presents great historical and strategic value.

The year of construction of Nakagusuku Castle is still not known to this day. The first generation of Nakagusuku Ajis started the construction in the second half of the 14th century. The construction lasted for a few generations. Around 1440 the Lord of Zakimi, “the Yomitan Mountains Aji (Lord) Gosamaru” moved to the castle following an order from the King. It is said that Lord Gosamaru built the North enclosure and the third enclosure with the most advanced masonry technique at the time. He committed suicide in 1458.

After Lord Gosamaru’s death, the prince moved to the castle. Later on, the Nakagusuku Administrative Center, such as Magiri headquarters, was established in the castle and later the Nakagusuku village Office, which was destroyed during the war in 1945. )

Nakagusuku Castle after the war

After the war, Nakagusuku Castle was transformed into the first park of the prefecture. It was used to entertain the Okinawan people so they built a zoo and an amusement park.
On May 15th 1972, Okinawa was given back to Japan. Nakagusuju Castle became a government designated historical site and on December 12th, 2000 became a UNESCO World Heritage Sites under the title “Gusuku Sites and Related Properties of the Ryukyu Kingdom”. On April 6th, 2006 Nakagusuku Castle was chosen as one of the 100 famous Japanese Castles by the Japan Castle Foundation. 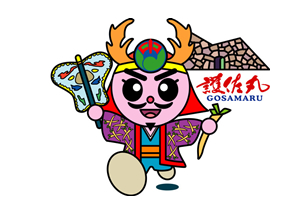 Lord Gosamaru was born in Yamada Castle and later succeeded the Yuntanza Aji. He fought with Sho Hashi for the unification of the three kingdoms and was a hero of the period of the first Sho dynasty. The term “Aji” refers to a lord or a chieftain.

In return for his achievements, Lord Gosamaru was given the Yomitan mountains area. He built the Zakimi Castle and started to live there and became the Yomitan Aji, and worked with the King Sho Hashi for the unification of the Ryukyu Kingdom.

However, the Aji of Katsuren, Amawari, was gaining power and in order to control him, the King ordered Lord Gosamaru to move to Nakagusuku where he became the Nakagusuku Aji. Lord Gosamaru killed himself in 1458 because he knew that the King (Sho Taikyu, the sixth king of the Sho dynasty) sent Lord Amawari, the Aji (lord) of Katsuren and the General of his army, to defeat him.
It is said that Lord Amawari wanted the King’s throne and regarded Lord Gosamaru as a threat so in order to get rid of him, he set up a deception so that Lord Gosamaru would appear treasonous in the eyes of King Sho Taikyu.

This event is called “the Gosamaru-Amawari disturbance” and is the theme of an Okinawan classic theater (Kumiodori). The play depicts Lord Gosamaru as the King’s loyal servant and Lord Amawari as the treacherous rebel. This is a play based on the interpretations of Shuri Royal Government. However, there are other stories that depict Lord Amawari as a hero beloved by his people. This event is the most mysterious one in the Ryukyu Kingdom’s history. 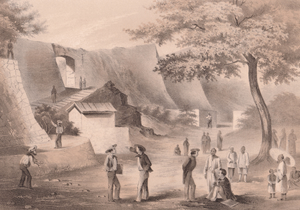 In 1853, the Perry expedition that came to Japan to pressure the country to open its borders made a stop at the Ryukyu Islands. Perry conducted an inland survey that included Nakagusuku Castle. From this expedition there are remains of some sketches of the castle and measurement plans.
Perry wrote the following in his narrative of the Expedition of an American Squadron to the China Seas and Japan: “The material used to build the fortress is limestone and the masonry is an admirable construction. The stones are processed in a very interesting way and are carefully shaped and jointed, even though cement or mortar is not used. I think this work will last for a long time.”

The American soldiers who came from a developed country were astonished by the advanced construction technique of the Ryukyu inhabitants when they saw the barricades that had withstood wind and rain for more than 400 years.

Reference material: Gusukus of the Ryukyu Kingdom and related heritage, Cultural property of the Nakagusuku village, Nakagusuku Castle ruins pamphlet, A stroll in the Nakagusuku region, The historic way The Tokaido of the Nakagami District: “The Hanta passageway”.